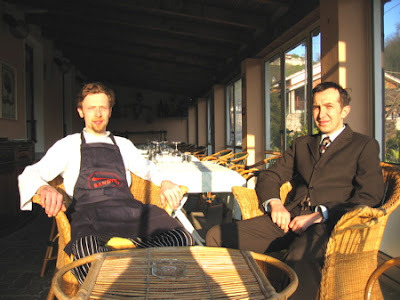 After having worked for many years as managers at the "Brasserie Roma" at Asti, and several years experience assisting at the "Sant’Uffizio" at Penango, "La Piuma d’Oro" at Asti and "Il Canestrello" at Cinaglio for wedding receptions and other catering functions, in 2002 chef Massimo Rivetti and maitre Antonello Bera decided to open up their own restaurant business in Portacomaro (Asti) with the name "Ristorante Bandini".

The two of them still continue to serve traditional local dishes as well as dishes with that little bit of extra zest to very demanding local customers (who are conservatives but who hate "that same old stuff over and over again"), and to the tourists visiting the area to spend their holidays in the midst of nature.


The restaurant is not in the centre of town but approx. 2.5 kms from the Asti Est motorway exit on the Turin-Piacenza A21 Motorway, and 1.5km approx from the Asti-Alessandria main road.

How to reach us at Bandini


We feature in many restaurant guides:


Other blog contents in English

Would you like to visit us for the first time?

How to reach us at Bandini

Would you like to place on your site a link to this blog?
Send us an e-mail to ristorantebandini@hotmail.it and let us know your site's name and it's URL, and sooner we'll do as well.